“Let’s stop the deserts and replace cement with a natural product”.

Arcadia is a system for quickly “fossilising” completely natural soils and organic materials (from 5 to 28 days depending on the application); to do this, the biological action of bacteria already present in the selected soil is exploited, which are fed ad hoc to obtain the desired effect without any consequences for the ecosystem of the treated soil.

It is possible to adjust the “hardness” of the soil to our liking, up to compressive strengths similar to and greater than those of concrete. 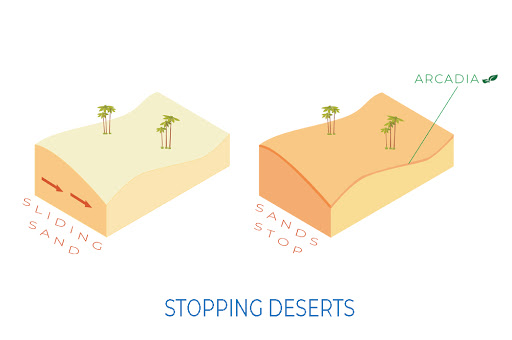 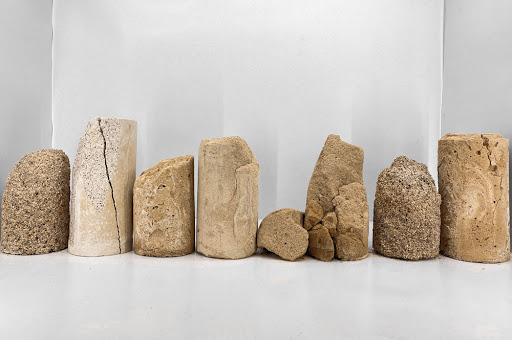 OTHER USES OF ARCADIA

Arcadia has many other uses that we will mention briefly:

We have a plan to replace plastic with Arcadia using wood or sand/earth waste. For example: we can start replacing waste bins in public parks, fibreglass boat structures, and so on. We can also create complex moulded sculptures that can be created by artists and designers and made with Arcadia.

Arcadia is a process that, by exploiting bacteria, is the subject of an Arcadia Patent. Arcadia is a product that, when sprayed on soil or sand, fossilises the soil in a few months. It uses the same system as fossils, but instead of taking millions of years, in just two or three months the process is complete and the sand or soil hardens. We can obtain different types of hardness, from sand to marble. It can be used to prevent and stop desertification; in fact, the countries of Algeria, Morocco and China have already expressed their interest in cooperation for their deserts. Arcadia can also prevent the land from sloping in the event of flooding.

The technology can be used for example to: