The liberalisation of agricultural products in the coffee and cocoa production chain began in Côte d’Ivoire at the turn of the 2000s. Côte d’Ivoire’s public authorities in the agricultural sector adopted new measures for its implementation, including in particular the Law on Cooperatives: Law 97-721 with ministerial publication of 23/12/1997. Following the various awareness-raising actions initiated by the Ministry of Agriculture and Animal Resources, 250 producers in the Bandama region felt a real need to develop an independent agricultural cooperative called Ecomo, which was set up at a general meeting held on 10 October 2003 in the prefecture of Divo. The area in question covers an area of 2000 square kilometres and has a population of 300,000. The region produces over 250,000 tonnes of cocoa and 50,000 tonnes of coffee, plus significant quantities of rubber, palm oil and other minor products.
OUR PRODUCTION IS MAINLY IN IVORY COAST AND GUINEA CONAKRY

OUR COFFEE (ROBUST and ARABIC)

Coffee is a tropical plant belonging to the Coffea genus that can reach an extension of 10 metres, but to facilitate harvesting it is kept at a height of only 2 metres. There are numerous species of coffee, but only two are economically important for production: Arabica coffee, from which we get a better quality and more aromatic aroma, a bitter and more persistent taste, has a caffeine percentage between 0.9 and 1.7% and represents about 1/4 of world production.

The plant grows at altitudes above 900 metres. It does not like rigid temperatures and is sensitive to variations in heat and humidity, so the higher the altitude, the better the quality of the coffee. Robusta coffee is a coffee of slightly lower quality but with a lot of body, a strong aroma, very fragrant and with a higher percentage of caffeine from 1.6 to 2.8%. The plant grows at a lower altitude between 200 and 300 metres, is easier to manage the cultivation and accounts for almost three quarters of world production. The beans are round and smaller in size. 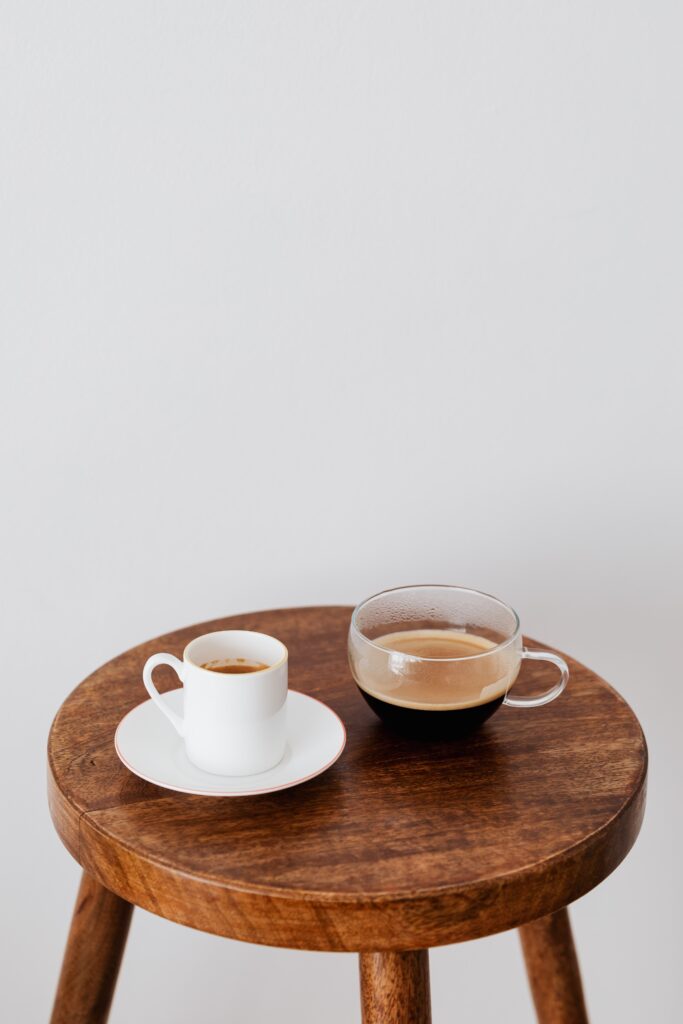 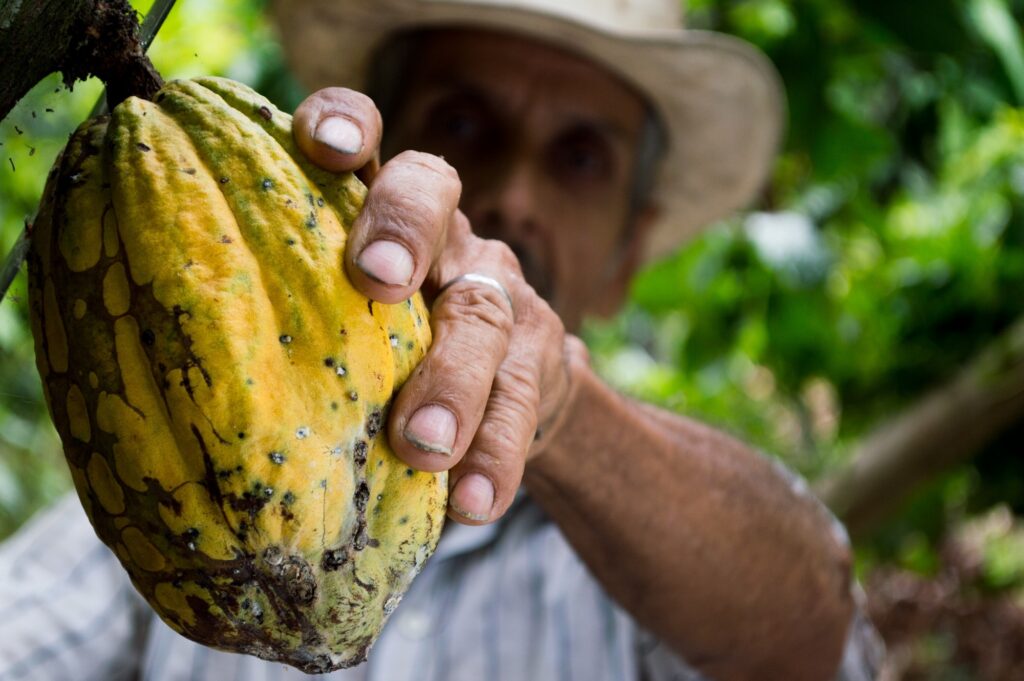 OUR COCOA (FORASTERO and CRIOLLO)

The cocoa plantation is usually sheltered from wind and sun by banana trees or other similar trees. This is especially necessary in the first years of the plants’ life and ensures a very humid environment. One of the unique features of this plant is the position of the fruits (called Cabossa), which can appear anywhere, on the trunk or on the branches in a completely random manner. The tree can grow to a height of 10 metres, but to optimize production it is kept around 5 metres tall. The ripening cycle is continuous throughout the year and two harvests are made: one before the rainy season (with higher quality fruit) and one after.

Once the ripe fruit has been harvested, the diseased black cabbages are removed, while the yellow and orange ones are opened with a blow with a machete and the white seeds wrapped in a white, sweetish jelly are left to ferment in the shade under the trees and covered with banana leaves or in special wooden boxes for 5 to 6 days. At this stage the pulp liquefies and is removed. The seeds are then dried in the sun for over a week to reduce their moisture content, taking great care to cover them both in case of rain and night dew. During and immediately after this phase, the black beans, the flat ones, the placenta and the rejects are eliminated, while the best beans, which have taken on a brown colour, are selected and divided according to their size and stored in jute sacks, placed on wooden pallets and in well ventilated rooms. At this point the machines come into play. The first is the roaster, followed by the milling process, which uses millstones to eliminate most of the skins.

The first is the roaster, followed by the milling process, which uses millstones to remove most of the skins and the final product is a cocoa bean made up of cocoa butter and a lean part in almost equal percentages. Then the conching is carried out. In practice, the mixture reaches a temperature of around 40 degrees, becomes liquid and is beaten on the walls, facilitating the release of most of the acids. The last process, which guarantees a homogeneous chocolate that can be stored for a long time, is tempering. The temperature reached in the previous step is lowered below 30 degrees, stabilising the cocoa butter crystals and giving them the gloss and texture we are used to.

Rubber trees (Hevea Brasiliensis) grow wild in hot, humid, jungle conditions and are found not only in Latin America, but also in South-East Asia and some countries in tropical Africa, including Côte d’Ivoire. The tree can reach a height of more than 30 metres, begins to produce from the sixth year of age and will be prolific for another 30 years or so.

Adult plants produce more. Orthogonal incisions are made in the bark at the laticiferous canals so as not to damage the tree’s growth and their sap is used for processing and the production of a wide range of rubber products. Hevea is of enormous economic importance due to the latex, which is collected in small bowls tied to the trunk and is the primary source for the natural rubber known as caoutchouc. Uses For more than a thousand years before European settlers arrived, local people used rubber to make shoes, bottles, torches and balls.

It took years before the settlers figured out how to use the latex, which hardened and had to be used within a few hours to prevent it from falling off. The latex they managed to collect was used for elastic bands in clothing and tubes for medicinal purposes. In the 1820s they devised a way to turn the hardened sap back into a liquid, thanks to which manufacturers were able to invent new products, such as today: sterilised gloves, condoms, mattresses, toys, upholstery, tyres, seals, carpets, 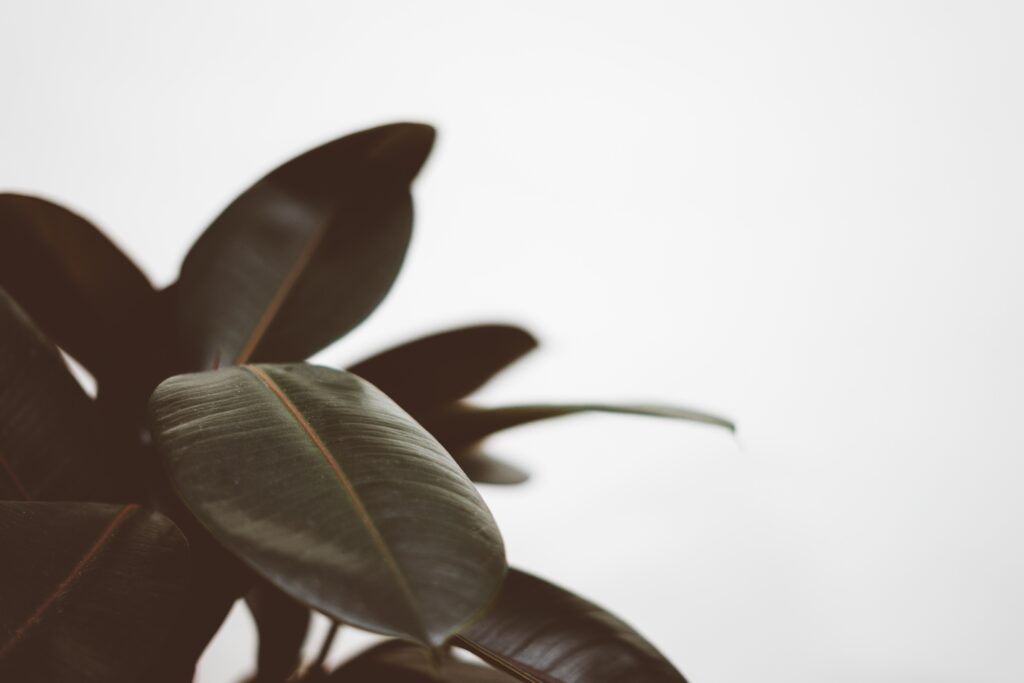